Australia’s environment minister could soon be above the law 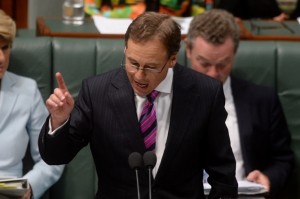 Earlier this month, a Senate inquiry paved the way for the Parliament to give Environment Minister Greg Hunt legal immunity against future legal challenges to his decisions on mining projects. If it passes…

Gregory McIntyre does not work for, consult to, own shares in or receive funding from any company or organisation that would benefit from this article, and has no relevant affiliations.

Greg Hunt, and all environment ministers past and future, could be protected from legal challenge over mining approvals. AAP Image/Alan Porritt

Earlier this month, a Senate inquiry paved the way for the Parliament to give Environment Minister Greg Hunt legal immunity against future legal challenges to his decisions on mining projects.

If it passes the Senate, the move will protect the government from being taken to court over the Abbot Point dredging scheme, the Curtis Island gas project, or any other environmentally contentious development in Australia.

More extraordinary is the fact that the government (with Labor’s help) has pushed the legislation through to safeguard an earlier blunder made by former Labor environment minister Tony Burke. Why? Because it will protect Greg Hunt from being challenged over deliberate or negligent decisions that do not comply with the law.

In 2012, Burke approved a proposal by Shree Minerals to develop an iron ore mine in the Tarkine area of Tasmania. The Tarkine National Coalition, a local conservation group, took him to the Federal Court.

But Burke did not take this advice into account when approving the mine, which is in an area that is home to one of the few remaining Tasmanian devil populations not affected by the presently incurable devil facial tumour disease.

In 2013, the Federal Court ruled that Burke had failed to comply with the EPBC Act, which requires the minister to consider conservation advice provided under the Act.

The Coalition government has now licensed Greg Hunt (and retrospectively Tony Burke) to avoid compliance with the EPBC Act by passing the Environment Legislation Amendment Act 2013 in direct response to the Court’s ruling against Burke.

The amendment retrospectively validates ministerial decisions – even if they did not comply with the EPBC Act when they were made.

The problem with this approach is that it breaches internationally accepted legal principles, for no real reason other than to assuage misplaced nervousness in the mining industry following the Court’s decision.

But there was no reason to pass retrospective laws following the Tarkine decision, because Burke granted a new, valid approval straight afterwards, this time making sure he took into account the conservation advice.

Burke’s decision did not need to be validated retrospectively. The court didn’t order him to reject the mine; it just told him to follow the environmental rules.

That’s why the new amendment is overkill. Not only does it validate an unspecified number of past decisions, but it will also apply to any future decisions that do not comply with the EPBC Act.

The new law might have been inspired by Burke’s tribulations in the Tarkine, but its impact will reach much further. It will apply to any proposed development in any environmentally sensitive area, anywhere in Australia.

That could include the Great Barrier Reef, which is under threat from dredging at Abbot Point as the port is readied for the export of $28.4 billion in coal reserves from the Galilee Basin.

Activist group GetUp!, among others, is attempting to mount a legal challenge against Hunt’s decision to allow the dumping of three million cubic metres of dredge spoil in the Great Barrier Reef Marine Park.

But the new amendment could protect the government from any such challenge. As such, it casts doubt on the integrity of the implementation of the EPBC Act itself.

Threatened species would be left effectively unprotected in the event that the environment minister either negligently or deliberately ignores approved conservation advice. Clearly this is not a good legislative outcome.

The Senate is set to debate the amendment again next month, having been advised by the Department of Environment that the new law will have only “minor” impacts in the future.

They will be far from minor unless the Senate heeds the Law Council of Australia’s advice to amend the legislation to ensure it does not cover future decisions (a recommendation backed by the Senate Environment Committee).

If they choose to accept this recommendation, then the only impact will be political. It will have achieved the aim of reassuring the minerals and energy lobby that the government is on its side – which appears to be the point of the entire bizarre exercise.