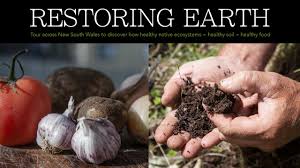 Let’s get one of Australia’s most heated conflicts on the dinner table: let’s talk land clearing. From paddock to plate, more and more consumers are looking to know where their food comes from, and will be surprised to know that Australia ranks third among developed nations for land clearing globally. Land clearing has soared under reforms in Queensland, and now the NSW Government’s reforms to the Biodiversity Conservation Act could pave the way for a return to broad scale land clearing.

Contrary to the pioneering philosophy that clearing the native landscape equals productivity, land clearing is responsible for a deficit in water and poor soil quality. So, it’s time to bridge the gap on one of Australia’s most heated environmental conflicts – and to show how farming within healthy native ecosystems is possible.

A documentary funded and supported by The Wilderness Society- wilderness.org.au/restoringearth

Queensland's landclearing reforms to restore better and reasonable vegetation protections are due to be debated in parliament on 16 August. Be part of the 'Restoring Earth' story by taking action now