Construction of the airport will require 2.7 million cubic meter of fill. The fill is proposed to be dredged in Moreton Bay within either one of two existing dredging sites (Middle Bank or Spitfire Channel).

Dredging is a highly destructive process causing the complete removal of the benthic zone with significant impacts on turbidity levels in surrounding areas which are of particular concern for ecosystems that are sunlight dependent such as seagrass beds.

There are existing dredging permits in place for both locations however these do not cover dredging for fill for Sunshine Coast Airport and would require amendments. No land base source of fill has been identified.

The fill is proposed to be pumped on shore. This will cause the inflow of significant amounts of salt water which would drain into the Maroochy River. Although the river is tidal at this point the impact of the influx of additional salt water should be examined.

There is also significant risk of sediment erosion which could lead to increased turbidity levels in the river.

Leakage of saltwater to groundwater should also be investigated.

There is a significant population of the endangered Emu Mountain She-Oak (Allocasuarina emuina) onsite. Approximately 5.3 ha of core habitat for the species would be impacted by the Project. Most of the individual trees found on site are located in close proximity to the footprint of the runway, aprons or buildings and are likely to suffer during construction or from edge effects, indeed it is difficult to see how the population could possibly be retained over the longer term in its current location with the current design. (See map for further detail).

The site contains important foraging habitat for the vulnerable Grey-headed Flying Fox (Pteropus poliocephalus) approximately 41.8 ha would be impacted by the project.

The site contains habitat that is suitable to the vulnerable Wallum Sedgefrog (Litoria olongburensis) and the species is known to occur on the site. The Wallum Froglet (Crinia tinnula) and Wallum Rocketfrog (Litoria freycineti) are also likely to occur on site.

The site is known to be home to the vulnerable ground parrot (Pezoporus wallicus).The airport perimeter fence is likely to be contributing to the existence of the ground parrot population on the site, providing protection from foxes and cats. Retaining the integrity of the perimeter fence throughout the project will be important for this species (and is also an aviation safety requirement). Maintaining appropriate ground vegetation will be crucial to the continued survival of this species.

There is a number of other flora species that may occur on the site. Click here for more information.

A small patch of RE 12.1.1 (Casuarina glauca open forest on margins of marine clay plains) is present on the site within the footprint of the new runway. This RE is listed as of concern under the VMA act, and considered Endangered based on its Biodiversity Status.

Adjacent areas on the western side contain other patches of ‘of concern’ and ‘endangered’ REs. These areas may be impacted upon by drainage of salt water when fill is pumped on site. (See maps for further detail).

The Sunshine Coast is known to provide a home to a large number of migratory species, many of which or coastal bird species restricted to foreshore, mudflat or estuary habitats. The airport site itself does not contain habitat suitable for most of these species but noise impacts from the airport, from planes as well as helicopters, may impact on suitable habitat in surrounding areas.

The following migratory species are known to occur in the vicinity of the airport: 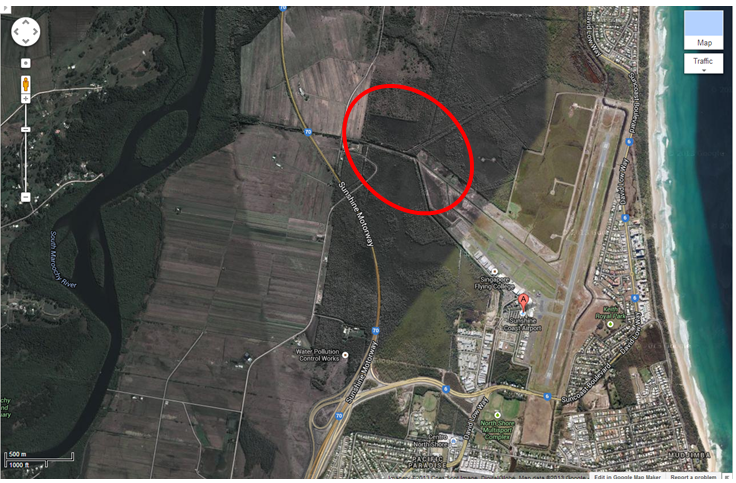 The airport is bordered on the north and south side by parts of the Mt Coolum National Park. Both these areas are recognised as having ‘Very High’ ecological values as habitat for endangered, vulnerable and rare species.

The patches are currently connected by a vegetative corridor that is dissected only by a narrow drainage line. The proposed new run way dissects this corridor and would sever the link between the northern and southern sections of the Mt Coolum National Park. (See the map to the side for further detail).

The long term survival of EVR species currently present within the area may be dependent on maintenance of this link.