Sekisui decision to be made Thursday 21 June 2018 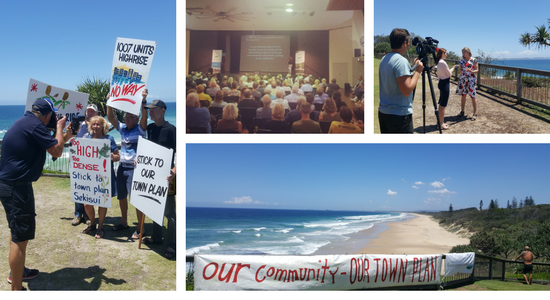 Last week, a report by Sunshine Coast Council officers recommended approval of the Sekisui House Yaroomba Beach development application, despite conflicts with the Planning Scheme and an unprecedented 9,288 objections from the community. Now, in a Special Meeting tomorrow - Thursday 21 June - 11 Councillors will go to vote and decide if this inappropriate development gets the green light.
For years the community has stood up together for beautiful Yaroomba - one of the last stretches of the Coast untouched by high-rises, dense buildings and light pollution. And there’s never been a more important time to make our voice heard.

With just one day left until Councillors decide whether to approve Sekisui’s development application, will you urgently email or phone them, and join us at the Special Meeting tomorrow to show the groundswell of community opposition to this inappropriate development?

Here’s how you can let Councillors and the Mayor know how you feel about keeping Yaroomba the special place it is by respecting the planning scheme and the people:

PHONE THEIR OFFICE
You can find your Councillor’s phone number on the Council website here.

Remember to be polite and state the reasons why you don’t support the proposal. Here are some examples of points you could raise:
ATTEND THE SPECIAL MEETING

Join us at the Special Meeting tomorrow Thursday 21 June, 2pm at the Sunshine Coast Council’s Nambour chambers - a strong community presence at Council meetings has made a difference before and can do again tomorrow.

Places like Yaroomba are too special to let go. If Sekisui’s development application is approved, we could lose the natural beauty and community of Yaroomba forever. Please speak up now.

Other info:
The Agenda for the Special Meeting (Complex DA Matter Thurs 21 June) including the staff report recommending approval and other documents can be found on the Council website here.
Sekisui’s Yaroomba Beach approved by Council officers, article by Sunshine Coast Daily, 15 June 2018
×