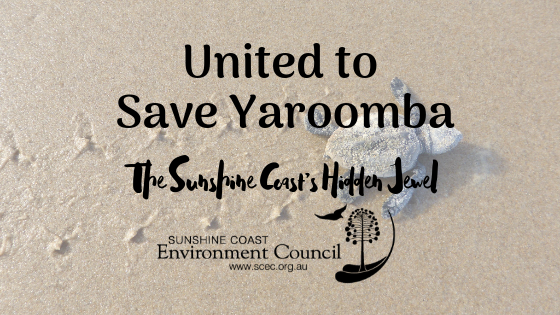 Watch our video of turtle hatchlings on Yaroomba Beach.

This is what's at stake if we don't win our fight!!

In June 2018, the Sunshine Coast Council approved a controversial proposal by developer Sekisui for a high-rise, high-density residential, retail and hotel development at Yaroomba - a significant turtle nesting site for endangered loggerheads and one of the Sunshine Coast's last untouched coastal jewels.

This was despite years of community opposition and Sekisui’s proposal being contrary to the Coast’s town plan – a contract with the community to protect our beautiful Coast from developments just like this and to respect our values.

But the fight to save Yaroomba isn’t over. Together with community group Development Watch, we’ve appealed the Sunshine Coast Council's decision and taken Sekisui and the Council to the Planning & Environment Court
We will be in court on the 18th of November, but we need your help and your donation to get there. Please help us now.
The thing is, this case isn’t just about Yaroomba. Winning this appeal is critical for the future of the entire Sunshine Coast’s outstanding environment and character. The decision by Council to narrowly approve Sekisui's development application sets an alarming precedent. If one developer is given the go ahead with a proposal that doesn’t meet the planning scheme on so many counts and ignores massive opposition, what precedent will this set for all other developers and what makes the Sunshine Coast the special place it is?

Inappropriate and intensive developments in environmentally sensitive areas like Yaroomba goes against what the community, visitors and what the town plan says should happen.

More than 9,000 people sent submissions opposing Sekisui’s controversial proposal. It is the largest number of submissions ever received on a development proposal on the Sunshine Coast and likely elsewhere. We know the majority of the community doesn’t want it, and together we can and must save Yaroomba.
This appeal is an expensive and complex legal undertaking requiring weeks of court hearings and the services of high-calibre barristers, solicitors and expert witnesses.
We obviously don’t have the big bucks of international developers like Sekisui.  What we do have is something more powerful - a passionate and determined community.
Please Unite with us to save Yaroomba because once it’s gone, it’s gone forever. We can’t let that happen!