Cash for Containers Update: A Great Leap Forward for Bottle and Can Litter Reduction and Recycling in Queensland

Environmental groups have welcomed the State Government’s decision to introduce a Container Deposit Scheme (cash for containers) in Queensland, describing it as a great leap forward for litter reduction, recycling, environmental protection and a vital financial boost for community organisations interested in can and bottle collection. 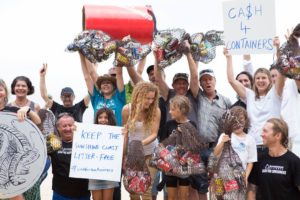 ‘Cash for containers is a proven scheme and will slash litter rates, increase recycling across the state, create hundreds of jobs in collection and re-processing and provide a financial boost to community organisations interested in collecting can and bottles.’ said Toby Hutcheon, spokesperson for the Boomerang Alliance and Wildlife Queensland.

After 26 years of solid work by hundreds of thousands of Queenslanders involved in Clean Up Australia events, we welcome the Government’s leadership in acting to stop containers; which represent nearly a quarter of all rubbish reported, being discarded in the first place,’ said Ian Kiernan AO, Chairman and founder of Clean Up Australia.

‘The introduction of a container deposit scheme will be an important first step in tackling the huge problem of plastic pollution in Queensland.’ said Samantha Wockner, Campaigner from Greenpeace Australia Pacific.

'Queensland is the most littered State with litter levels well above the national average.’ said Greg Howell, President of Surfrider, Gold Coast and Tweed

‘In Queensland we use over 2.4 billion beverage containers every year. Most are either landfilled or littered. In South Australia, which has a container deposit scheme, over 80% of containers are recycled.’ said Craig MacIntyre, President of Surfrider Sunshine Coast

‘The fact is that beverage containers represent a large part of all litter. The introduction of a scheme could reduce litter in Queensland by 50%, and limit the impacts of dangerous plastic pollution of the environment.’ said Kellie Lindsay from Gold Coast and Hinterland Environment Council

‘Tangaroa Blue Foundation strongly supports the QLD Government’s commitment to reducing litter and increasing recycling through the introduction of a Container Deposit Scheme for QLD. We work with very remote QLD communities, and we hope that this program will give them access to recycling opportunities that due to their location, they currently have no access to.’ said Heidi Taylor, for Tangaroa Blue Foundation

With NSW set to introduce a cash for containers scheme in 2017, this decision means that NSW and QLD can cooperate and address container litter once and for all. We hope this joint action will encourage other states such as Victoria and WA to follow suit.

‘We look forward to the implementation of a CDS as soon as practical, however, this should be no later than 2018.’  said Narelle McCarthy of Sunshine Coast Environment Council

‘South Australia, with its cash for containers scheme, has according to the CSIRO, the least amount of plastic and container litter in Australia The scheme is overwhelmingly popular.’ said Roz Walden of CAFNEC

‘We pay tribute to the many local groups and thousands of people in metro and regional Qld who have campaigned for many years.  We also welcome the support of the QLD LNP, the Independents and the Speaker of the QLD Parliament in backing a cash for containers scheme. Bipartisanship has made a big difference.’ said Darren Kindleysides of AMCS

‘With recent Queensland polls showing 85% support for cash for containers and 73% concern about plastics in the environment, we call on all sectors of Queensland society to get involved with this proven and effective measure.’ said Jo Stoyel of Plastic Bag Free Livingstone.