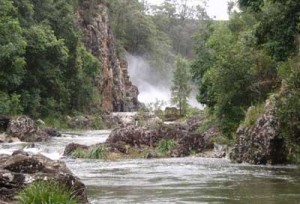 ZIP-LINE OK FOR TOURISM BUT NOT FOR NATIONAL PARK-SCEC

The region’s peak environment group remains concerned that the high environmental and scenic values of the Kondalilla National Park will be at risk from a proposed zipline.

Narelle McCarthy of the Sunshine Coast Environment Council (SCEC) said “Queensland is already falling well short of the mark in terms of protected areas with just 5% in National Park. The introduction of commercial activities which are likely to compromise significant conservation values and impact on the passive enjoyment of millions of visitors is extremely inappropriate.”

“SCEC is supportive of the right mix of tourism opportunities for the Sunshine Coast.” Ms McCarthy explained.

“While we are fortunate to have magnificent natural assets within the region underpinning our lifestyle and economy, these special places must also be respected for the important role they play in conserving the region’s declining biodiversity and as refuges for threatened species. National Parks are the cornerstone of conservation and should be managed and protected for these values.”

“A well-operated zip-line could be suitably located in an area outside of National Park. This would still offer a nature-based experience and provide benefits to local businesses and communities” she said.

SCEC is particularly concerned at the manner in which this proposal has been conducted. No other site has been considered and only preliminary conceptual documents have been produced before going into a state government tender process. This made the proposal ‘commercial-in-confidence’ effectively excluding community consultation and necessary scrutiny.

“The Queensland government is already responsible for severe rollbacks in environmental protection. Now with the Federal government handing over federal environmental powers, like the EPBC Act, we have little confidence the necessary environmental standards and assessments will be met or maintained. . The protection of rare listed species and significant natural heritage and conservation values of the Kondalilla National Park  is at stake” Ms McCarthy cautioned

The National Parks Association of Queensland (NPAQ) is very concerned about the impact on wildlife of a zip-line proposed for Obi Obi Gorge in Kondalilla National Park near Maleny.

Paul Donatiu, Executive Coordinator with NPAQ said that "This Government is ignoring its duty of care to conserve rare species in our National Parks, including koalas, in the name of adrenalin tourism."

All the large emergent trees that could support a zip-line over Obi Obi Gorge are koala habitat trees.  The alternative of building dedicated steel platforms to suspend the zip-line would necessitate more damage to a very unique landscape in a special National Park.  The clearing of vegetation to hang cables between platforms would further damage habitat for two listed rare bird species that are found in the Park.

Mr Donatiu said that "Opening up the forest canopy for the zip-line will allow established weeds, such as Lantana, to spread further in the National Park.  In addition, the proposed zip-line will cross the main bushwalking path near the Gorge, be visible from certain vantage points (for which park visitors are predominantly drawn to the park), therefore both the sound of the zip-line itself and that of the patrons using it will only serve to detract from National Park experience for the majority of visitors."

Mr Donatiu also said that "A key aspect of ecotourism is that the tourism activity leads, or adds to the conservation of the ecosystem in which it operates.  The inclusion of an environmental educational component in the proposed zip-line will do little for the National Park itself, particularly as research overseas shows a strong indication that tour guests are impatient for the thrill of the ride.  In this instance, the zip-line will benefit from the National Park environment, but the Park will not benefit from the zip-line.  Rather, it will be heavily impacted by it."

No other zip-line in Australia is found in a National Park.