Shelly Beach: next instalment of Light vs Shade

Posted on February 05, 2021
If you care about the environment, dunal protection, dunal vegetation protection, and the survival of the critically endangered loggerhead turtle (and we know you do!) please
register to have your say as part of the community consultation - Future coastal management of Shelly Beach and Moffat Beach


Your feedback by 1 March is vital!

Our previous post on this issue  ' Light vs Shade - what it means for Turtles’ outlined well-considered and necessary protection measures for endangered marine turtles that had been recently installed by Sunshine Coast Council at a section of Shelly Beach. Unfortunately, this small but effective piece of coastal infrastructure was taken down. And rebranded as "fence renewal."

Some local residents objected to loss of "visual amenity" caused by the slightly higher (0.9 m) fence and shade-cloth, and raised a petition which was tabled at the 10 December Council meeting and referred to the Office of the new CEO for review. Despite letters and other feedback to Council and the Councillor supporting the initiative, a decision was made to provide a "compromise" by removing the shade cloth, which has now occurred, even though the nesting season has only recently started and will continue to around the end of April. Compromises to date have not been in favour of the turtles!

Following two separate petitions that a generated over 2000 signatures, a row of Lomandra longifolia were planted in a raised bed under the fence. While better than nothing, they provide only limited protection for the current nesting and hatchling season, and despite feedback and to appease a few, had their tops trimmed off them so that the lights of 4WD and other similar-sized vehicles shine straight over the top of them.

The other areas of fencing, where the shade-cloth reduced the light spill from vehicles parked or travelling south along Ocean Court, as well as lights from vehicles reversing out of the parking bays that result in large sweeps of moving light across the middle and southern sections of the beach, were left with small plants a few centimetres high and thus providing no protection.

New signs attached to the fence in front of the four parking bays asking drivers to turn off their lights are pointless, as drivers will not see them until the light disturbance on the beach has already occurred. Considering the difficult weather conditions recently experienced, with extensive beach erosion, and with more to come under the influence of the current La Nina, this decision was most untimely, and against the advice of Council's own expert officers, science and the views of the broader community.

As part of the decision to overturn the shade-cloth measure, a study of the coastal strip from the southern end of Shelly Beach northward to Tooway Lake on Moffat Beach was announced to be undertaken by Council in early 2021, including public consultation. The investigation seeks to better understand community perspectives on what is valued about this section of coastline and the challenges and opportunities associated with its management. The findings of this investigation will help inform council management of the area.

No matter where you are, please contribute to this study by having your say before 22 February. This nesting season still has about 8 weeks to go - there needs to be enduring protection for seasons into the future. So let's make this count!
An endangered species deserves better protection than this...even more so in urbanised coastal locations 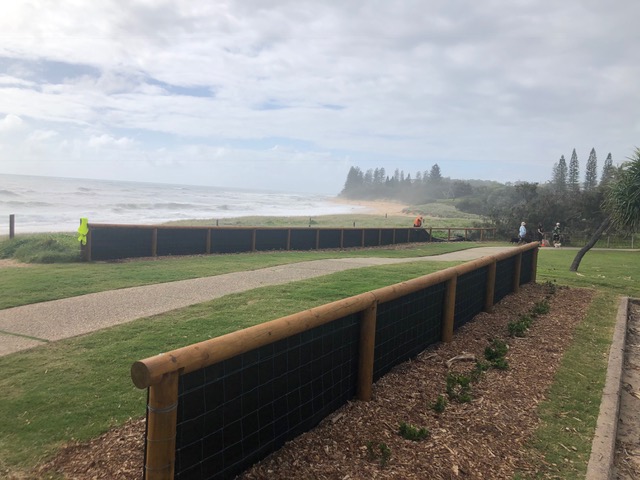 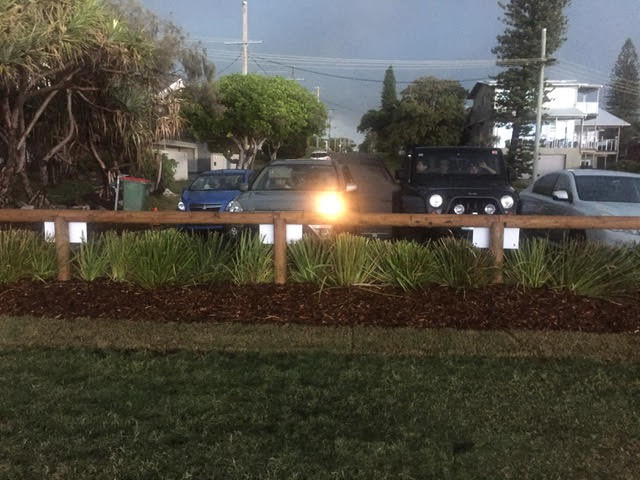 Left image:
Unobtrusive and effective coastal infrastructure offering basic protection from light impacts. In the process of being taken down on 18 December 2020 after less
than 4 weeks of being installed.The newly planted vegetation would have provided additional screening & added to visual amenity had they been given the chance to grow!
The shade-cloth also served to catch sand blown off the beach to build up the dune & keep it off the pathway
Right image:
The 'Fence Renewal' - ineffective and with ill-suited vegetation for the coastal environment  (note uniformly trimmed lomandra!) offering no barrier to light pollution.
Images supplied
×