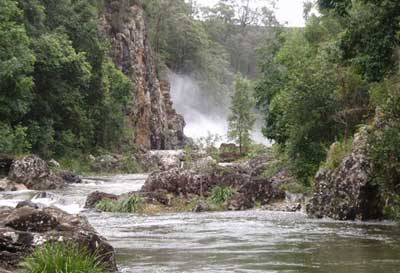 The region’s peak environmental advocacy group remains concerned the high conservation and scenic values of the Kondalilla National Park and its spectacular Obi Obi Gorge will be at risk from a proposed zipline.

The Sunshine Coast Environment Council (SCEC) maintains it is inappropriate and unnecessary to locate a commercial, adrenaline based activity within a National Park.

“The stunning scenery of Kondalilla National Park attracts thousands of people each year who come for passive recreation and enjoyment of a natural and peaceful environment” said SCEC spokesperson, Narelle McCarthy .

“While we are fortunate to have magnificent natural assets within the region underpinning our lifestyle and economy, these special places must also be respected for the important role they play in conserving the region’s declining biodiversity and as refuges for threatened species”.

“National Parks are the cornerstones of conservation. Kondalilla is part of Queensland’s small National Park estate at just 5% and it should be managed and protected for these values.” Ms McCarthy emphasised.

“SCEC remains supportive of the right mix of tourism opportunities for the Sunshine Coast, particularly those in keeping with the natural values and amenity of the region.” Ms McCarthy explained

“A sustainably managed and ‘eco-accredited’ zip-line could be suitably located in an area outside of National Park and still offer a nature-based experience with a range of benefits” she said.

SCEC has been concerned from the outset about the lack of scrutiny of the proposal, including no alternative sites being considered or feasibility studies undertaken in scoping for an activity of this type.

Ms McCarthy reminded “The Palaszczuk Government has said it supports the national park estate being managed in accordance with the cardinal principle, which is to provide, to the greatest possible extent, the permanent preservation of the natural condition and the protection of the estate’s cultural resources and values”

“This fundamental object of the Nature Conservation Act was removed in a raft of damaging environmental roll-backs by the previous LNP government. It is absolutely necessary this is reinstated in legislation and adhered to in practice. ”she said

“With the risk to the conservation values of the Kondalilla National Park and the need to manage it for the ongoing protection of threatened species not for questionable commercial operations, we call on the government to abide by this commitment and to stand by previous statements that a commercial zipline venture is not supported in this location.” Ms McCarthy concluded.

See latest in the Daily's article